Meeting at Mile End Homemaker we had another great turnout of 7 cars for this show ’n shine. With a 5 min drive from the meeting point to Wayville Showgrounds we hopefully didn’t accumulate anymore dirt on our cars before arriving! We were there a tad early so we waited outside for the gates to open.

Once open we made our way into the check in point and were ushered to our display area where we began to set up. We were pretty lucky to have a decent area allocated to us so we decided to put up our big marquee which in turn maximised our impact in the display area. Once we put some flags up and also some bollards running across the front of our cars we dispersed in all directions, some chilled under the marquee with the rest of us checking out the other insane cars that were on display outside and inside the pavilion. There were some real beauties there including 2 of our members (Brenton & Sue) who had their cars on show inside. Their displays were very impressive and did not look out of place at all.

While that took up a big chunk of the day, mid afternoon rolled in pretty quickly and it was time for the trophy presentation to begin. They had quite a few trophies to give out which was great and our club was lucky enough to win the “Best Club” award, that was my aim going in to hopefully pick this one up and with everyone’s help on the day we did achieve this, thank you to everyone that helped!! I was surprised to have picked up the “Best Stance” trophy also.

Following the trophy presentation we proceeded to move our cars out of the display area in order to allow room for the incoming Zipple Cruise, which normally consists of approx. 400 cars which is a great addition to what is already on display there at the show. Peter Wadham had his Thunderbird there which is always great to see him roll in! 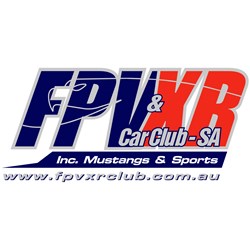 Dangerous driving, careless driving, failure to have proper control of a vehicle or causing the vehicle to make excessive noise or smoke are considered hoon-related offences involving the improper use of a motor vehicle.

This dangerous driving behaviour places the safety of drivers and other road users at risk.

The FPV & XR Car Club of SA Inc promotes safe driving and compliance with all traffic laws (Road Traffic Act 1961 - section 44B - 47B).

The club is very clear about it's driving protocols and the club accepts no responsibility for any unlawful actions taken by members or visitors to the club.